AURORA  is a sectional plan parabola designed to produce hot water, primarily for power plants for district heating in Denmark as well as globally.

The parabola design and control system  ensures a very high degree of efficiency as the sun is followed throughout the day and thus optimizes the utilization of the solar radiation.

Compared with alternative solar panels on the market AURORA has delivered groundbreaking  test results  in terms of efficiency, competitiveness and application:

Compared with alternative plan solar systems, AURORA is more than twice as effective per m² (ground area) and produces approx. 25 MWh/year per unit 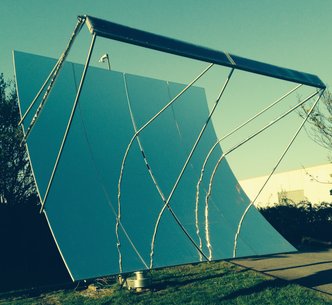 occupies approx. 1/3 of the base area compared to alternative plan  solar systems and can be installed on uneven and hilly terrain without maintenance of the underlying terrain's flora due to the distance from the mirrors to the ground level 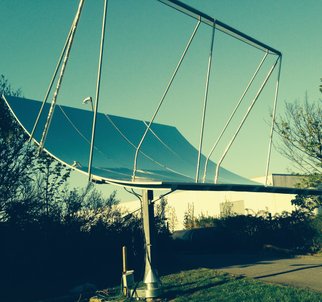 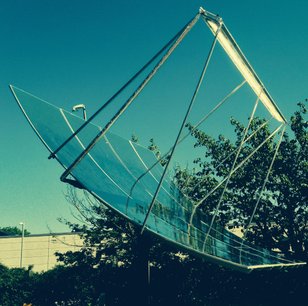 can deliver a constant temperature depending on demand, such as 90 ° C to buffer tank or 60-70 ° C directly to the net without lowering the efficiency of the system 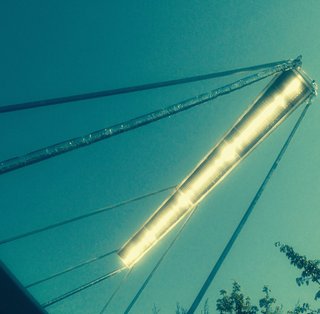 is protected against extreme wind and weather, as the parabola can withstand up to 70 m/sec and will respond in advance via an out-of-wind alarm, which positions the parabola horizontally 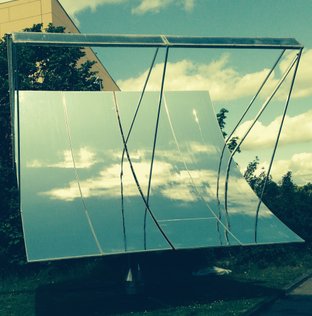 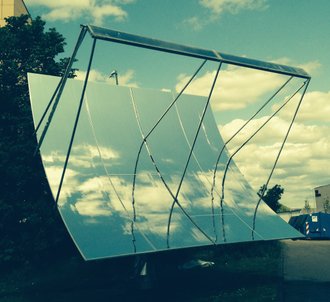 Aurora CSP is a plan parabolic mirror system. As a natural follow of the parabolic shape, the solar energy is concentrated in focus (Receiver) where it is transferred to an energy absorbing media.

AURORA has in its construction a build-in double axis sun tracker, which make it possible to receive energy from the sun when it is between 8 degrees above horizon in up- and down going directions. The azimuth (Compass course) is followed during the day.

AURORA is equipped with silver plated mirrors with a reflectance of 94 % and is in its standard version constructed to an effect of 30 Kw in 4 mirror sections. Expected annual energy production on north European latitude (UK; DK; south of Sweden) is estimated to 25 MWh.

AURORA has for security reasons some alarms installed. “FLOW-alarm” telling about to little flow in the receiver and a “Wind-alarm”. In both cases initiates respectively – out of sun and out of wind function from the control box. This means the parabola goes to “Safe-mode”. In the evening the parabola is making a “Homing” which means that the actuator goes in full length and the azimuth turns back to the start position for the next morning.

AURORA is designed to withstand wind gusting up to 70 m/s but goes in “Safe mode” at 17 m/s. (Adjustable).

AURORA can STOP the production of renewable energy at any time either via remote control or by pushing the emergency button.

The mirrors can be washed via a special “Wash mode” which turns AURORA 90 deg. out of sun – to prevent burning.

AORORA is founded in approx. 1,3 m³ concrete and can easily be placed in hilly areas. Great savings are foreseen, as AURORA does not need planned ground. The soil beneath the mirrors is a place for wild and natural fauna/flower bed and does not need any attention because the mirrors never goes lower than approx. 700 mm above the ground.

AURORA mirrors are 5 meters high and has a width of 1,56 m and has reduced the need for ground area with about 65 % compared to plane solar panels (stationary).

The energy produced is estimated to give an annual saving of 9-9,5 tons of CO₂ (Oil equivalent)

By setting up AURORA PARKS – every section will be controlled by frequency regulated pumps allowing only water of a fix temperature to be lead out into the system. This is developed in cooperation with Ramboll Energy.

As part of the development of AURORA the following scetches of a AURORA park installation has been developed in cooperation with Rambøll.